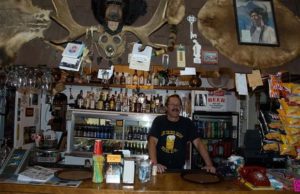 Wayne, Alberta, is a ghost town in more ways than one. The hamlet in the Badlands has fewer than 30 residents but it used to be a thriving coalmining town of over 2,500 people. Some of its former residents haven’t left; their spirits linger in the Last Chance Saloon and Rosedeer Hotel, much like those who haunt other towns nearby, like Nanton and East Coulee.

The Rosedeer Hotel, which first opened in 1913, is especially prone to paranormal activity . Its current owners, Dave Arsenault and Paula Sutherland, have experienced all kinds of sounds, from footsteps to their names being called out when nobody is there. Dave once felt breathing on his neck and smelled someone’s bad breath; when he turned to see who was there he discovered he was alone. It’s stories like that which have attracted other paranormal investigators to visit the hotel, too.

According to the town’s history, the hotel has a dark past. When miners at the nearby coalmine started to resist their poor working conditions, the mining company hired goons from the Ku Klux Klan to watch out for anyone with Communist sympathies and rough them up to prevent them from forming a union. They would beat them, butt out their cigarettes on their victims, and even tar and feather them. At one time, the bar was known as “The Bucket of Blood” thanks to all the vicious fights that took place there. One night, the clan went too far, and their victim, whom they were beating up in a hotel room on the third floor, didn’t survive. Whether his name was Jon, like the spirit who communicated with Jeff and Michaella, we don’t know, but it’s entirely possible.

There are also stories of ghosts haunting the local graveyard, and legend has it a number of miners’ bodies ended up in the Rosebud Creek. A number of the coalmines in the region are also said to be haunted; workplace safety wasn’t quite what it is today and miners were regularly decapitated and crushed between heavy coal carts.

Not far from Wayne, in the little town of Nanton, another ghost roams around the local auditorium, opening and closing doors and moving furniture around. Known as Rex Irwin, he may have been a ranch hand who worked in the area in the 1920’s. And in East Coulee, another mining town that is now more of a ghost town, there have been numerous accounts of paranormal activity in the East Coulee School Museum, as well as in the Atlas Coal Mine in Drumheller.

Though the mining boom may be gone, it seems that not all the miners have left.

Extra Research for Season 5 - Episode 11 - Sergeant of the Well