Our experience at the Empress Theater as captured during this episode was confirmation for me that a level of intelligence continues after death. I had been feeling uneasy for the majority of this shoot. I could not put my finger on it – but my feeling was that something was with us. Trailing us. Following us like a wisp of smoke in the night. Curling it’s tendrils around us and holding us in place. At least holding me in place. One night after we had been shooting for the majority of the day – I returned to the hotel after midnight. I was exhausted from the day – but still felt like there was something amiss. Something or someone, that was watching, waiting, and plotting.

I had been gifted a large quantity of very powerful blacksalt – I decided to place the salt across the threshold of my door that night – so as to prevent anything from gaining passage into my room. What is blacksalt? In this case it is sea salt mixed with ash, as well as powerful healing herbs. This particular batch was crafted by a friend of mine who is a witch. She made it the blue moon – it’s incredibly powerful stuff.

I was floored the following morning when I opened my door and saw that the salt had been removed. It appeared to have been “brushed away” by someone. This was particular troubling as no living person had access to that hallway after a certain point of the night, and it was free of wind.

This leads me to believe that a spirit moved the salt. This is even more frightening considering the intention with which it was laid was out of protection. The salt is super powerful stuff. No spirit, demon, banshee, wraith or otherwise should have been able to manipulate of cross that salt line.

I’ve included these before and after images…

That same day we found ourselves back at the Empress Theater. Before we left I casually snapped a selfie in the main theater hall to post later on Instagram. That is when I captured something waiting and watching in the background.  This image still makes me uneasy… 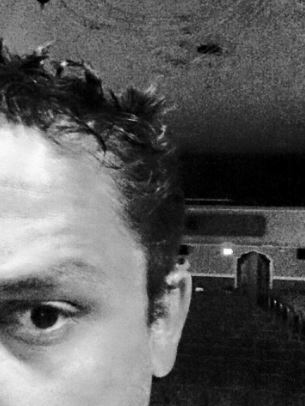