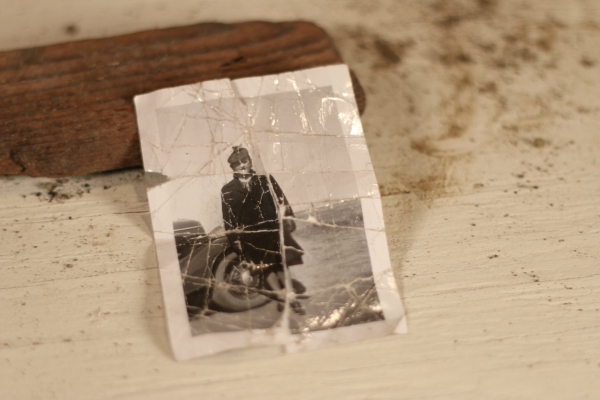 The finding of physical evidence during investigations is not at all usual. Yet, over the course of 3 seasons we have managed to uncover some incredible things. Our discovery at Dawn Mentuck’s residence is one of the most incredible. We managed to find a number of animal bones which we quickly recognized (and later verified) as feline in bones aside – I was most struck by the photograph. An old picture of a young lady standing in front of a vintage car. The picture looked to be from the 1940’s. What was more startling was the name inscribed on the back of the photo you could try these out. It seemed to say “dawn” our subject’s name.

That’s not to say that the woman in the picture was our subject – but there was now a verifiable connection that may have drawn the spirit present to attach itself to Dawn. Was her name being spoke aloud by friends and family members enough to draw the ire of a restless spirit? My theory is that the man we were dealing with was attracted to Dawn simply because of her name.

There is a good chance that Richard would hear the name, and it invoked a connection.

The woman in the photograph I do believe was the original “Dawn”. Someone who likely lived in the space years before Dawn Mentuck and her family began to inhabit the space.

Without the discovery of these artifacts we may have been left with no real leads on this case. It is important to follow our instincts when we work on cases such as this. Tom made the initial discovery of the animal bones. Had we cast it off as something that was of little value to the case – our searching would not have yielded such incredible results.

I suggest anyone reading this and participating in paranormal investigations to consider the value and the validity of hunting for just as much physical evidence and paranormal evidence while you investigate.  You never can be too sure what you may turn up and how it may relate to the case you are currently working on.

‘concussions have become the new global warming’One patient had tabes dorsalis, another had a cavernous malformation of the globus pallidus, while others had little pathology and were neurologically normal during life. A number of the subjects boxed in the early part of the twentieth century, when several hundred fights were not uncommon. You wouldn’t see a world renowned hockey player coaching a NFL football. The same is true for your business. As a consumer of information, it is important that you can make decisions about which measures are most useful. Just because you can use mean, median and mode in the real world doesn’t mean that each measure applies to any situation. 6. The four touchdowns are a career high for http://www.footballjerseysuppliers.com Amendola he had three in 2012, his final season with the Rams in which he had 63 receptions. Our entertainment group team is performing well on every level: merger integration, cross selling, special bundle offers, advertising, and now streaming services. But the second half of the year is when our integration efforts really take hold. Modify a text element of the template. Select the text element by clicking on it. Enter the customer’s name at the top of the Sales Receipt form by clicking the drop down arrow underneath “Customer:Job.” Choose the customer from the Customer list that appears. If the customer is new, manually type the last name followed by a comma and the first name in the Customer:Job field, then press the “Tab” key on your keyboard. Let’s talk about the shooting motion. A really good shooter will tell you that establishing a shooting routine is crucial. Now I want to come Tsuki, I want to drive them back as quickly as I can. This Tsuki motion’s beginning to really give me some distance to work. 6. Crail, Indy, Trindy, Tail, Tailfish, Stalefish, Slob, Mute, Seatbelt, Melon, Lien and Nose. So if you do have a chain that looks pretty rusty and crusty like this one the best solution is to just go ahead and leave the chain on the bike and put a little bicycle specific chain lube on the chain, what we use specifically fake ray ban sunglasses is just your average run of the mill lubricant that is called triflow. You can also use white lightening or T 9 or anything that a bike mechanic would recommend to you and the way you would do that is just put the nozzle of the dispenser or whatever and then just squeeze lightly and back peddle just a little bit and get kind of an even spread there on the chain, just go ahead and saturate Fake Oakley Outle it.
in Behind the Scenes / Episode 304 / Jeff Richards / Season Three
Share

Behind the Scenes of Season 6 – Episode 12 – Return of Lucky