Extra research for Season 3 – Episode 12 – When the Whistle Blows

Every year thousands of people die in mining accidents around the world. Some of them die while saving others, which is what happened in 1910 at the Bellevue Mine, a place still haunted by its hero.

The Bellevue Mine is one of several haunted mines in Canada. Paranormal activity has also been reported at the Atlas Coal Mine and site of the Frank Slide, in which a rockslide killed nearly 100 inhabitants of a mining village.

The paranormal activity at the Bellevue Mine is so strong that even Bella, the local dog, avoids the mine. Maybe her senses are simply stronger than an average human’s and she reacts to other natural things that people can’t see or hear, or maybe she has a dog’s sixth sense. There are numerous stories of animals detecting paranormal activity. 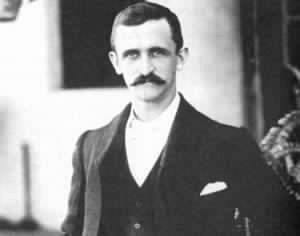 Photo credit: BC Ministry of Energy and Mines. Fred Alderson.

Perhaps Bella senses the spirit of Fred Alderson, the Hosmer Hero, a member of the rescue team who died in the mining disaster. Quite a bit has been written about Alderson. His life and sacrifice even inspired some musicians to write a song about him. And John Kinnear, a mining historian and former board member of the Bellevue Mine, has even suggested that Alderson be posthumously awarded a medal for his service.

“If ever a man deserved a medal of bravery it would be Fred Alderson,” John told The Other Side.

According to John, Alderson didn’t just sacrifice himself at the mine. He also sacrificed himself for his family. Alderson grew up in an orphanage in England, and as an adult traveled around the world working in mines in Mexico, South Africa, India and Canada to support his family.

“It’s not easy to leave your family behind and do that. He wanted that much more for his family,” John explained.

As the investigation revealed, Fred’s spirit is still strongly attached to a man named Robert, who may have been his brother, also called Bob and Bobby. Robert Alderson lived nearby and was buried in Creston, BC. Did Fred make sacrifices for him? 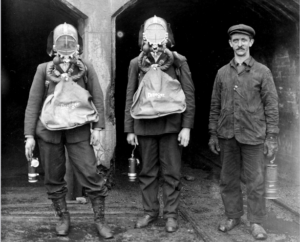 Photo credit: BC Ministry of Energy and Mines. Frank Alderson is on the right.

We may never know which Robert the Hosmer Hero is hanging around in the mine for, but it’s nice to know that Fred may still be there protecting the Bellevue Mine. And John Kinnear said he thinks Fred would be happy to know he hasn’t been forgotten.

“He’s really an interesting man. I would have liked to have met him. He’d be humbled to know that we still think about him today,” John said.