Is it possible to live peacefully with a ghost in your home?

Starting in 2010 Joanna and her family began having dark experiences in their beautiful, newly-built log cabin, including doors slamming, an accident in which the family dog died, and the children crying out in their sleep at exactly 3am on numerous nights. 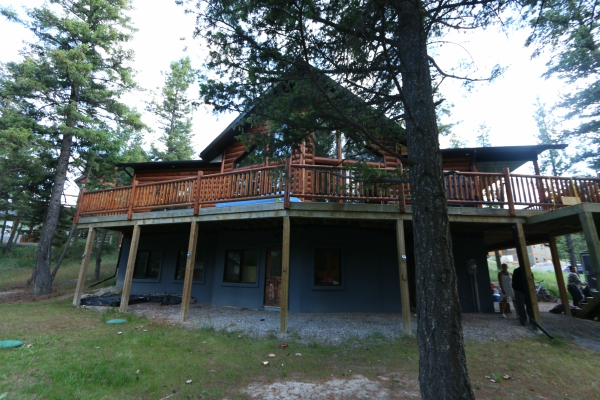 Joanna used an Ouija board to contact the spirit and from her communications with the spirit, she learned it was a young First Nations girl who may have drowned in Columbia Lake, where the cabin is located. Hoping to get the spirit to leave her family alone, Joanna asked a medium to bless the cabin with sage, but that didn’t work.  Finally she contacted The Other Side to ask for help.

Initially the spirit responded positively to Tom’s ceremony and the requests to leave Joanna’s home. On the second night when Jeff and Michaella did a follow-up investigation there was no sign of the young spirit.

The spirit may have left for a while, but in the end she came back. When The Other Side got in touch with Joanna recently, she said the spirit had returned. It had even followed her and her family to their home in Calgary, perhaps an indication she was more attached to the family than to the cabin by the lake.

But the spirit’s behaviour had changed. It appeared by Joanna’s bedside as an apparition, but this time it wasn’t intimidating or scary. Joanna believes it was simply there to let her know it was protecting her and her children.

Aiden also dreamed of the spirit and saw apparitions of her, but he, too, is convinced it is a friendly spirit who wants to protect the family. Now he wants the spirit to stay with them. Perhaps this confirms what the investigators heard, that the ghost simply wanted to be friends with Aiden.

Other paranormal activity continues to happen, such as items disappearing in the kitchen. But now rather than worry about it, Joanna simply asks the spirit to bring them back, and within a few days the items turn up right where they belong.

Who this little girl was remains a mystery. The Other Side searched through hundreds of British Columbia death records from 1936 and 1937 to see if there were any young girls who drowned, but not a single match could be found. Nor did anyone from the nearby towns or First Nations know about a drowning in Columbia Lake from the 1930s. We asked about paranormal activity in the area, too, and while there are a number of mysterious tales, none seemed to be linked to the spirit in Joanna’s cabin.

Whoever she was, she seems to have found a place where she is happy. Until she is able to move on and join her ancestors on the other side, there is space enough for Joanna, her family, and their spirit to live peacefully together in their cabin and Calgary home.