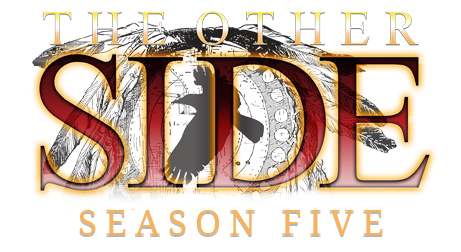 The Other Side is a 13-part half-hour documentary series that follows a team of paranormal investigators who, with the guidance of an Aboriginal Elder, seek the truth behind real life ghost stories and the most unsettled spirits in Canada.

Intuitive Jeff Richards, Investigator Michaella Shannon and Aboriginal Elder and Spirit Guide Tom Charles embark on a paranormal expedition to find out why. The team engages the spirits through a mix of technology, intuition, and Aboriginal spirituality and ceremony, all with the hope of restoring balance between our world and the world where spirits walk.
For each investigation, Jeff uses his abilities to initiate contact and reach out to the spirits, Michaella digs for the story behind the story while both seek cultural guidance from Tom, who attempts to guide the spirits to the other side and restore balance and harmony. The team does their best to answer why the location is suspected of paranormal activity, who the spirit is, and why they’re communicating, while taking steps to enable the unsettled spirit to move on.
The Other Side – Season 5 is a co-production between Saskatoon’s Angel Entertainment and Toronto-based RedCloud Studios, with producers Wally Start and Jennifer Podemski. Directed by Saxon de Cocq, Francis Laliberte, Luke Hutton, and JJ Neepin.

Jeff is a busy father of four little boys, but he’s also a well-known mentalist and intuitive. His extremely sensitive readings of people amaze audiences and drive listeners to his paranormal radio show. But even more amazing is his ability to juggle the demands of parenting with the constant and pervasive contact with the unseen. While it’s sometimes mentally and spiritually draining, he chooses to keep sharing his gift and forging ahead – with one foot planted firmly in this world and one in The Other Side.

Michaella’s encounters with death have driven her to pursue as many life-affirming activities as she can squeeze into one young life – working on suicide prevention, addictions awareness and self esteem with young people. But behind all the activity, a question mark still burns. While her career path moves her toward criminal law, there’s a path running parallel to it, searching for answers. She’s composed on the surface – but get to know her on The Other Side, and you’ll see there are depths of character to explore.

Legend has it that Tom’s skill as a tracker in the North doesn’t just come from experience – his keen intuition seems to come from somewhere else entirely. Every search is an attempt to heal the gaping wound of loss and bring answers to those who desperately need them. Tom keeps the show on its true path with his quiet determination to bind up loose ends and bring peace to the living and the dead.

Jennifer Podemski is an award-winning actor and producer whose career has spanned over three decades. Well known for her starring role in Bruce MacDonald’s acclaimed feature film Dance Me Outside, she has also appeared in Riverdale, Degrassi TNG, Sarah Polley’s Take This Waltz and Blackstone, among numerous others. Jennifer’s first feature film as a producer, Empire of Dirt (in which she also appeared), garnered 5 nominations at the Canadian Screen Awards. Behind the camera, Jennifer owns and operates Redcloud Studios Inc., an independent production company based in Barrie, ON. She also dedicates her time to mentoring Native youth across Canada and the USA, facilitating workshops on self-awareness and goal setting.

Wally Start is owner and executive producer of Angel Entertainment and Bamboo Shoots. He is an innovator with a proven track record of nurturing and growing successful production companies and creating outstanding international content. Angel’s portfolio includes the TV series Rabbit Fall, which was nominated twice for DGC’s Best Dramatic Series category, and the feature films Shadow Puppets, Stained, Big Muddy (TIFF 2014), and Empire of Dirt (TIFF 2013). Whether Wally is working on feature films or TV series, from concept to delivery, he is a hands-on producer – in the writers’ room, on set and in the edit suite. But that doesn’t mean he’s a control freak; on the contrary, he is a great collaborator always looking to co-produce with like-minded producers. Wally injects each project with the same drive and passion that has helped propel Bamboo Shoots and Angel Entertainment into two of western Canada’s leading production companies.

When Saxon isn’t working with commercial clients, he keeps busy by writing, directing and editing his own short films. Saxon’s most recent short film, The Invincible Sgt. Bill, aired on CBC in the spring of 2017. Over the last two seasons Saxon has had the privilege to travel across Canada directing a number of episodes of the nationally broadcasted TV series, The Other Side.

Francis Laliberte is a Media Artist of Cree decent who started work writing, directing, and editing videos that addressed the topics of Suicide Prevention, Addictions, and Healing. Three of his short films have won 5 film festival awards.

He has experience in movies, TV and commercials as a Production Assistant, Grip, Digital Imaging Technician, Assistant Director, and Director.

Whether as a Director, Editor, DP or Writer, Luke has been crafting award-winning visual stories for nearly 2 decades. He is a graduate of the the University of Southern California’s world-renowned School of Cinema-Television and his directing credits include series drama, series documentary, long form broadcast documentaries, music videos, museum installations, reality TV, and TV ads. In addition to his work in the field Luke is currently a full time professor of film production and screenwriting at Niagara College where he helps a new generation of filmmakers craft award-winning work.

Jenna (JJ) is a Cree First Nation’s Director and Writer living/working in Winnipeg, Manitoba. JJ has written and directed several documentary short films including CBC’s Headdress that had its world premiere at the 2017 Hot Docs Film Festival. She has also directed for several episodes of various documentary television programs. JJ has training/apprenticeship in Directing via the Academy of Canadian Cinema & Television’s Women Directors Apprenticeship and the Women in the Directors Chair – Story & Leadership program.

TOS IN THE NEWS: