Top 5 Paranormal Photos from “The Other Side”

Over the last two seasons of “The Other Side” television series, our fans have submitted incredible photos of the paranormal that invoke great debate on our facebook page. We have also posted several photos from our investigations that have been shared around the world.

Here are our picks for the Top 5 Paranormal Photos:

This photo was submitted to our facebook page with the description:

This is a pic of my son sitting on his grandpas grave. The pic was taken with a cell phone. My family and I see a ‘figure’ in the top left corner…. Any thoughts?

This pic was taken with a Samsung galaxy phone. No edits. Feel free to share it.

The day we first took the pic we didn’t notice this but looking back through them my sons aunt noticed it. We were completely shocked! I truly believe this is my father in law watching over his grandson.

The family of the boy were very active in the comments section of this photo and summarized their feelings with this beautiful sentiment, “This picture is of my son. And I really hope that is my father in the background. He as had a rough time the past couple of years. So I really do hope it’s his poppy watching over him…My son was only a year and a half old when my father died, so he really can’t remember him. If that is my father in the pic, it’s comforting to know that he is watching his grandchildren grow up, even though he is not with us. I never took the picture, so I can’t say if it’s photoshoped or not. I don’t believe it is. But even if it is, I don’t want too know cause knowing that my father is watching over us has put my heart at peace!!!!”

2. The White Lady at The Western Development Museum

When we investigate a location for paranormal activity, several members of our team take regular photos with the hope of capturing unusual activity. One of our hosts, Bill “Paranorbill” captured this figure in front of an antique car stored in the Curatorial Centre at the Western Development Museum in Saskatoon, Saskatchewan.

3. The Tourist Question about the Delta Bessborough Hotel

We posted “A recent traveller to Saskatoon posted this photo and with the caption ‘This hotel has GOT to be haunted’…What do you think?”

“I think this is the one my mom stayed at. There was an old German woman speaking German sitting by the window. She walked out n went to the front desk n they knew what she was talking about. Gave her another room.”

“I have set up and played events in the ballroom. While being alone I heared other ppl in the room, music while I wasnt playing any. My equipment in one spot then in a different part of the room when I was the only one there. I’m sure there are spirits in the Bez!”

4. The Mist Behind City Hall

This photo was submitted by photographer Jim Lucier with the description “This photo was taken the night of November 8. The image appears only once in a series of 70 photos taken. There is nothing reflective on the ground.”
When discussions were questioning the photo, the photographer shared these additional details

“FOR THE RECORD: I don’t smoke, and there was nothing burning anywhere around me. No cars were passing by. The tempature was about minus 1. All professionals in the fileds of Phtoshop arte welcome to incvestiagte, and investigate the camera I used. This photo took place only once in a series of 70 photos I took that night. I was taking photos of trees randomly.”

5. The Scratch on Jeff’s Neck 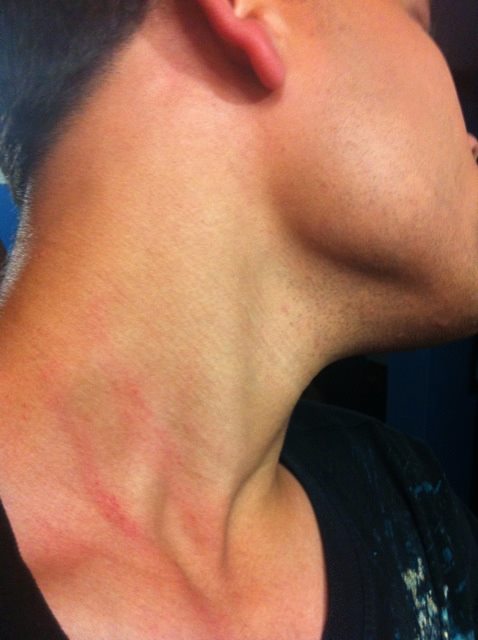 During a Season One investigation in North Battleford, one of the scariest things that can happen to a paranormal investigator happened to Jeff – he was scratched by an unknown entity during the investigation. The entire event was captured on video and this photo was taken directly after the team stopped production to recover from the extreme situation. This was an intense moment for many of our fans (and our team) and this photo evoked great concern and discussion amongst our facebook community.
Do you have a photo of the paranormal that you would like to share with our community? You can message us on our facebook page.
in Season One / Season Two 0 comments
Share

The Other Side checks in with past participants & investigations

More thoughts from "the Charcoal Man"

Jeff's Thoughts on the Season Finale